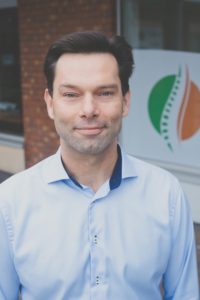 Marc-Jan Fransens was born is Nieuwkoop in the Netherlands and grew up in the surrounding area. After his second level education he went on to study physiotherapy at Thim van der Laan College in Utrecht. He graduated in 1998 and worked two years in his field before beginning his chiropractic education in 2000.  He graduated, with Pauline, as a chiropractor from the Anglo European College of Chiropractic in 2004 and returned to the Netherlands where he worked in Heiloo, North Holland, for almost eleven years.